Get election ready: Prepare a Government Relations game plan to kick off after May 18 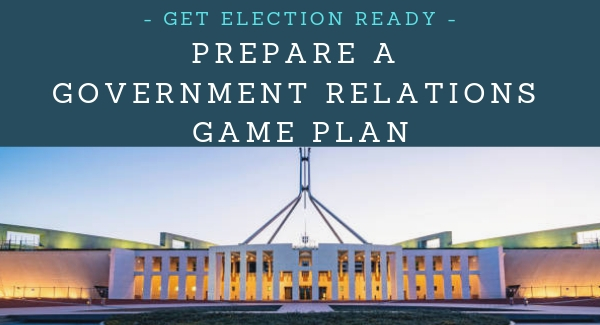 Here, Managing Director Taleen Shamlian provides some insights on the Federal election campaign and how your organisation can prepare a game plan to kick off after the election.

“To secure the future, the road ahead depends on a strong economy. And that’s why there is so much at stake at this election.”

Opposition Leader Bill Shorten downplayed this by stating that the Coalition’s approach has not worked and that Labor will “manage the economy in the interests of working and middle-class people”.

In terms of the fiscal messaging, the approach from both major parties could not be more starkly different: the Coalition wants to play on their traditional home ground by promising to bring the budget back to surplus and be seen as better economic managers; while Labor promises bigger surpluses through closing tax loopholes (such as negative gearing, franking dividends, capital gains tax) to support their traditional home ground of better health and welfare policies.

Aside from these overarching messages, it is good to take a look at where the parties and leaders sit in current polling.

Labor is polling ahead in two party preferred terms at 51% versus the Coalition at 49%, according to The Australian’s Newspoll. Both major parties are close in their primary votes, recording (around 37%), while Scott Morrison has a higher satisfaction rating (-1%) compared to Bill Shorten (-12%). All of this suggests that if the election was called today, Labor would win to form majority government but only slightly (77 seats out of the House’s 151 seats).

While this paints the picture at the macro level, the election will be fought state by state, seat by seat, and poll booth by poll booth.

But the top brass won’t campaign in every seat. Instead they are focusing on a handful of marginal electorates, in areas such as New South Wales and Queensland, to convince voters of their promises and pledges. It is no accident then that campaign headquarters is in Brisbane for the Liberals and Parramatta for Labor – both cities are outside of the leader’s home states but are used for pragmatic (read financial) and political (read swing voters) reasons.

Keep an eye out for Victoria – last November’s state election showed how strong the Labor brand is there, and the high chances of losing some marginal seats (including those that are now notionally Labor such as Corangamite and Dunkley). Some Liberals have changed their banners to be “Modern Liberals” or done away with Liberal branding altogether.

Impact on the financial services industry

Both major parties are committed to the Royal Commission’s recommendations, with Labor going further and pledging a $640 million ‘banking fairness fund’ to be paid for via a levy on financial organisations in the top 100 listed companies. Treasury is also using the caretaker period to prepare a Royal Commission implementation plan so that it can be acted on expeditiously, regardless of who comes to government, given the pressure from minor parties and independents.

Superannuation is also a point of difference with Chris Bowen, Shadow Treasurer promising to increase the superannuation guarantee to 12% in line with Paul Keating’s timetable and legacy.

Finally, they both agree that regulators need to step up their supervision and enforcement to help restore trust in our financial institutions.

The big question will be how each party will act on this, given the capability reviews of key regulators. The Coalition, which begrudgingly agreed to the Royal Commission, sees this as the end stage of bank reform. For Labor, which claims that the Government voted against the Commission 26 times, this is only the beginning of the reform journey.

Does your organisation have a Government Relations game plan?

Regardless of the election outcome, Ministers and policies will change and have an impact on your organisation’s bottom line, reputation and market position.

Sharpening your organisation’s Government Relations strategy should be a key focus during this election period, to ensure your organisation has a seat at the “policy table” to secure your business success.

Your Government Relations game plan and strategy should outline: